This might be the largest cannabis bust in the history of Los Angeles County.

On Wednesday, Los Angeles County Sheriff’s Department officials shared that they had seized $1 billion of marijuana in a 10-day operation last month that snapped up 373,000 unlicensed cannabis plants and 33,480 pounds of weed that had already been harvested.

The bust comes on the heels of a sweep made last month of Mohave Desert farms that police say were under the control of drug cartels, and that resulted in the arrest of 23 people. Charges levied included 22 felonies, 109 misdemeanors, and 19 charges from what NBC called “water theft enforcement teams.” (Operators of illegal grow sites are often accused of illegal use of water resources.) 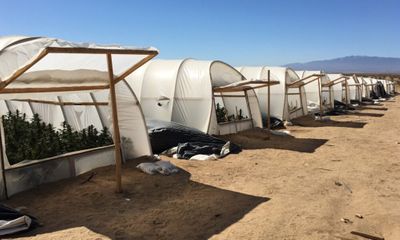 The bust comes at a time when California is attempting to reckon with illegal cannabis businesses, which continue to thrive nearly five years after voters authorized Prop. 64 in November 2016.

Some attribute the thriving unlicensed industry to the high taxes levied on legal cannabis products in the state.

The industry for unlicensed crop in the Golden State is so massive that it remains the main supplier of illegal weed to other states. A report by the Chicago Sun Times last month estimated that the majority of the $1.7 billion of unlicensed cannabis sold in Illinois comes from California.

On Tuesday, California member of the US House of Representatives Mike Garcia outlined what he sees as the cause of concern, as reported by the Santa Rosa Press Democrat. The situation, as Garcia portrays, seems to be a combination of environmental and human rights disasters that have worsened during the coronavirus pandemic.

“I saw hundreds, if not thousands, of these illegal nurseries throughout our desert being manned by primarily illegal immigrants,” he said. “Over 90% of the folks working these farms are indentured servants of some form. They’re stealing our water, in many cases, they’re squatting on our land.”

“I want to be very clear that these are not mom and pop or legal operations that we are fighting,” he continued. “These are large-scale illegal operations in many cases being run by several different cartels right here in our backyard.”

Officials say that the 10-day bust decommissioned 205 illegal grow sites in the desert, but that some 500 were documented when the air was surveilled by air.

But, okay. We understand these illegal businesses are undercutting the legal industry, giving cops and the feds a hard time, and potentially creating untenable working conditions for migrants. But, make no mistake about it: Things would be drastically different if there wasn’t such a massive barrier to entry for California’s legal industry. Also, the word “cartel” is a trigger word cops and politicians love to throw around. It’s a fancy term referring to a team of dealers working together to sell drugs, and in this case: Weed. There’s a good chance many “cartels” — whether in the desert or Humboldt — are run and operated by people who weren’t able to afford to get a license. So, ultimately, this falls on the state for establishing unsustainable laws and doing nothing to fix them.

Reports of USA-produced cannabis for the illegal market seem to be consistent with government investigations looking into where our drugs are coming from. A DEA report released in March said that the agency is seizing about 80 percent less cannabis at the US-Mexican border as compared to 2013. That’s because all the weed is coming from California now.

That same report bemoaned the challenges of legalization, citing the difficulty of apprehending unlicensed cannabis and its traffickers. The legalization of CBD and the tightening of probable cause regulations for drug policing has made it so that busting people for their trees is slightly more challenging.